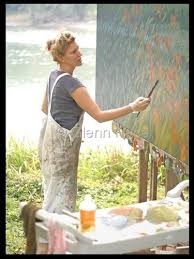 Barger has studied at Bennington College, Vermont, and she holds a B.F.A. from Cooper Union in New York. She was the 2012 Anne Reeves Artist in Residence and has been the recipient of the Pollock-Krasner Foundation Award (1999), a residency at the PS 122 Project Studio Space (1997-98),and the Faber Birren National Color Award (1998). Her work has been exhibited in solo and group shows in and around New York City including, Morpeth Contemporary Gallery, Cheryl Hazan Gallery, Broadway Windows, Saint John the Divine Cathedral, and Mercer County Community College.

Bargers newest body of work was completed at her studio along the Delaware River. Once again, Illia has immersed herself in the natural world, as her large, vigorously executed canvases intimately depict various flowering plants viewed at very close range. At second glance, the paintings divide into color fields, demonstrating her unerring sense of color-akin to perfect pitch. Yet, the subject and color of the paintings are vehicles, states Barger, always one to observe and convey the less obvious. She further observes that Nuance brings into focus subtlety. A marriage of the mystery of subject, subtlety and abstraction are formed through the colors and textures of petal surfaces as they dance in the light. The exhibition, entitled Nuance, defines the intention of these works, as  ... color and subject [being] vehicles for the more subtle language of nuance and sensuality.

As well as her paintings, Barger has executed murals both private and public. Her most recent work (2012) is the mural Continuum measuring 25 ft. x 45 ft. which she executed in downtown Princeton and a mural for Capital Health Hospital in Hopewell NJ, Poppies (2011), which measures 11 ft. x 32 ft. Her largest mural, commissioned by the EDC, is in the Brooklyn Army Terminal, Brooklyn, NY (1993) and measures 35 ft. x 150 ft.