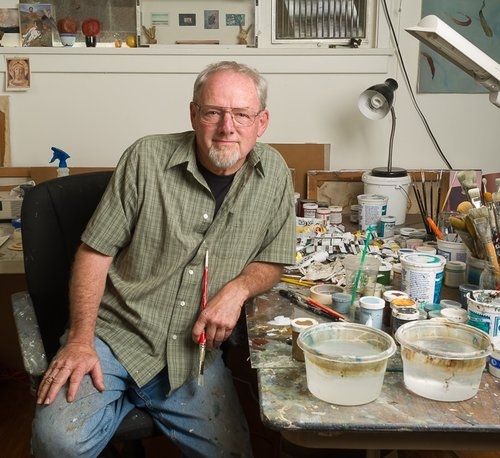 “I tend to want to retreat to a simple view and I get strength in that,” says Faust. “There’s nothing loud in them. Life is so loud these days. We’re bombarded with loud music and loud images and loud people. I’m trying to create these windows I can look at in order to re-center myself…windows that can re-center myself but also give people a respite from the world, too, and maybe help them re-center themselves as well.”

The Passing Dance
Acrylic on Canvas
40h x 30w in

The Sounds Of Oranges

Lost in a Haiku

My Compass
Acrylic on Canvas
40h x 30w in 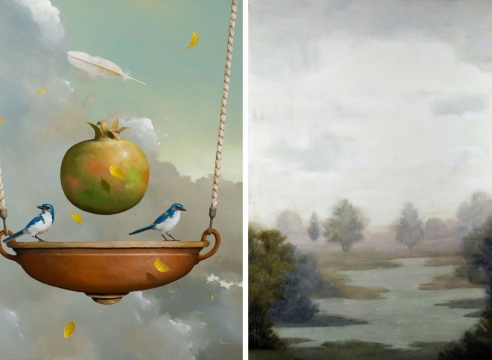 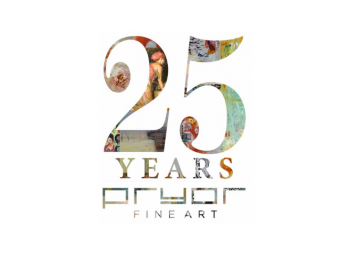 Self-taught California painter Jeff Faust has been painting since he was a child. By ninth grade, Faust was immersing himself into art books and art biographies in his parents’ book collection and was painting constantly. The young student – whose middle name is Manet – was particularly influenced by the work of Joan Miro, Magritte and Dali. Because of a “strong sense of wanting to do it on my own,” however, Faust says he passed on the notion of a formal education in art. “Plus, my father never encouraged me to go to art school, based on what he saw at the colleges,” says the artist, whose father worked in a university setting. “He was afraid I’d come under the tutelage of someone else and my gift would be stifled.”

Faust developed his own style of painting over time, and today describes his work as “subtle surrealism” or “visual forms of the written word.” His paintings often feature odd juxtapositions – a combination of clouds, ropes, leaves, eggs and other objects and settings that hint at some form of narrative. “The paintings, or the images, can be simplistic, but they have that gentle surrealistic thing in there, too,” says Faust. “There are various stories in these images. They offer various stories to various people.”

Faust’s paintings are often complex, yet he admits to being drawn to certain simple images – a bird with a twig, a bowl or a cup of leaves. When beginning a painting, he does not set out with a specific idea of what he wants the composition to be, but rather allows the painting to reveal itself. “I never know when I face a canvas what I’m going to encounter,” says Faust. “I use acrylics because they work perfectly for me. I work fast and change my ideas a lot. There’s not a set script. They offer me tremendous freedom. “My work produces thoughts,” he adds. “So when I’m working my work is producing more thoughts.”